Communicate with your doctor, get answers to your medical questions, request prescription refills, pay your medical bills and more. 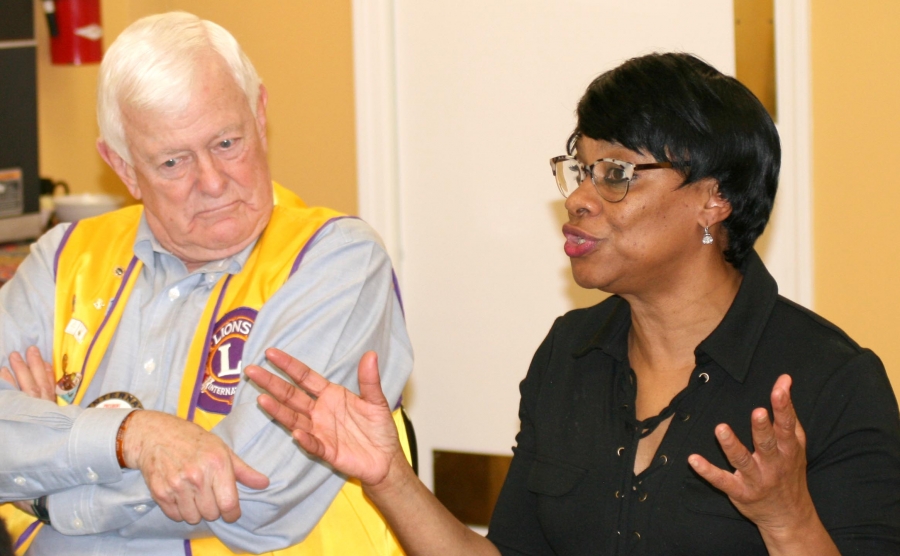 The Rocky Hock Lions Club has taken up the cause of helping Kecia Phelps get a lifesaving kidney transplant.

Phelps, who works at the Shepard-Pruden Memorial Library and previously waited tables at the Nothin' Fancy Cafe and Market, found out about a year and a half ago that her kidneys were not functioning. A biopsy was performed and she learned that she has a rare form of kidney disease in which the kidneys' follicles have died.

Doctors are not sure how long she has had the condition and don't know what caused it.

Phelps is participating in a research project to help doctors figure out what causes the disease.

She is now at only 8 percent kidney function but she's still getting up and going to work. In the meantime she waits for a kidney transplant.

"I'm determined that I'm going to get a kidney," Phelps told the club during its meeting Thursday. "Somebody out there is going to give me a kidney and I am going to be a survivor."

To that end, Phelps is working to get the word out to people to register as organ donors when they go to the N.C. Division of Motor Vehicles Driver License Office. She also plans to speak at area churches about organ donation.

You can register as an organ donor at the DMV Driver License Office. You also can register by going online to DonateLifeNC.org.

Joining the donor registry means that you have made a legal decision to become a donor at the time of your death. If you are 18 years old or older the decision cannot be overturned by others, according to information provided by Carolina Donor Services.

Phelps said that right now in the back of her SUV she keeps a bag at all times in case she gets the call that a kidney is available for her. She has two people who have agreed to accompany her to the transplant center when she gets that call. They are on 12-hour shifts every day.

Cooper said more than 120,000 people in the United States – including more than 3,000 in North Carolina – are currently waiting for a lifesaving organ transplant. The most-needed organ, he said, is the kidney.

North Carolina has the sixth largest organ donor registry in the country, with about 52 percent registration, Cooper said.

But organ donation is not as common among African-Americans, he said. The lower donation rate is due partly to "medical distrust," he said.

"We're trying to change that," Cooper said of the lower donation rate in the African-American community.

As an organ donor you can save up to eight lives and through tissue donation you can enhance the lives of up to 50 people, Cooper said.

For organ donor families and organ recipients who wish to meet each other, Carolina Donor Services helps make that happen.

"We do facilitate that entire process of meet and greet," Cooper said.

Although there is a rigorous process you go through if you wish to be a living donor – that is, donate one of your kidneys while you're still alive – it is possible to live a healthy and full life with one kidney if you do choose to go that route and are accepted for that lifesaving donation.

Reggie Ponder, editor of the Chowan Herald, spoke to the club about his own life with one kidney since age 15. Ponder's left kidney, which had been defective from birth, was surgically removed in 1979.

Ponder noted he had been able to live a full life with only one kidney, including open water swims across the Potomac, Neuse and Pasquotank rivers.

He said the main thing he had avoided because of having only one kidney was anything with a high risk of an impact injury to his kidney. For instance, he gave up waterskiing and never took up snow skiing.

Cooper emphasized that living donors are screened very carefully to make sure the person understands all the ramifications of the decision they are making.

Guy Simmons, president of the Rocky Hock Lions Club, pledged the club's support in finding a donor for Phelps. He told Phelps the group would "turn over every stone" in seeking a donor for her.

Phelps said she has faith that a kidney will become available for her.

"Somebody down the line is going to say, 'I am going to try to be help for her,'" Phelps said.

More information about organ donation is available online at www.CarolinaDonorServices.org or www.DonateLifeNC.org, or by calling 1-800-200-2672.

No one will be denied access to services due to inability to pay. There are discounts available based on family size and income.

This health center receives HHS funding and has Federal Public Health Service (PHS) deemed status with respect to certain health or health-related claims, including medical malpractice claims, for itself and its covered individuals.